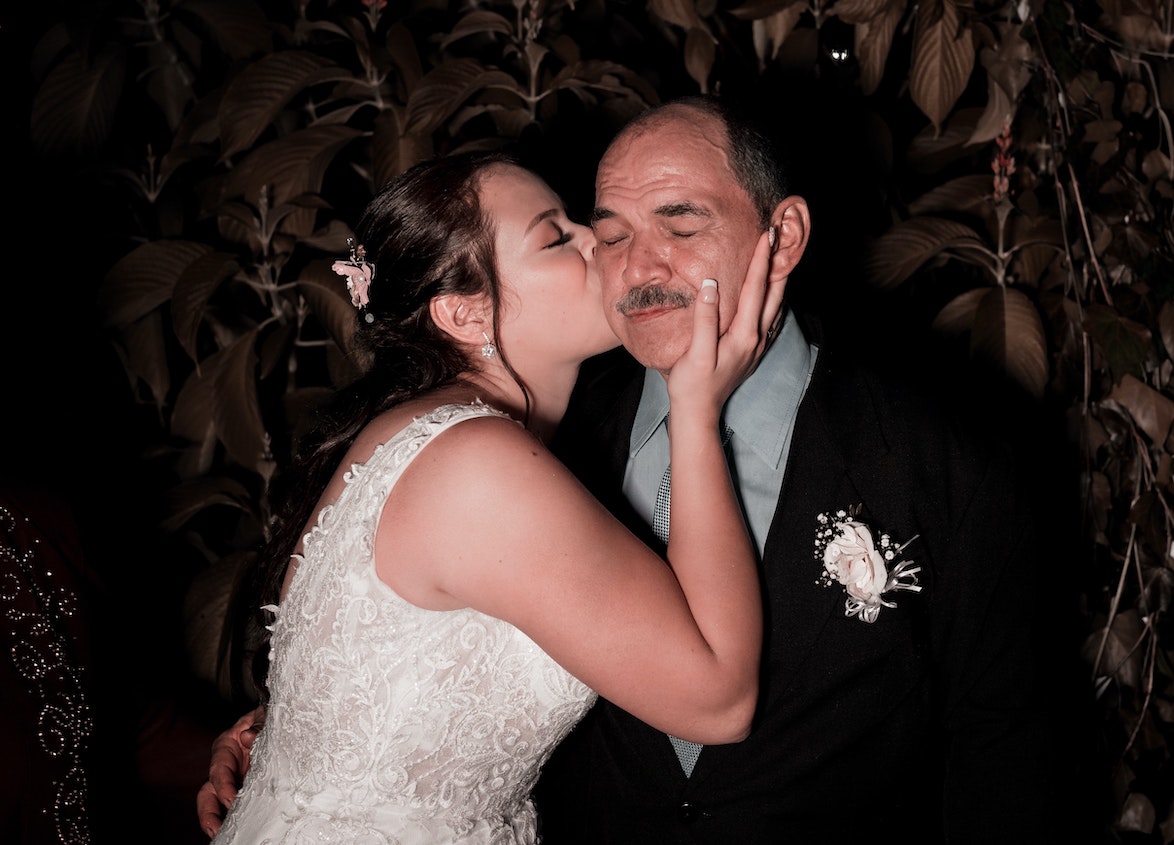 Your wedding will surely be an emotional day for your dad so this post is all about the father of the bride and his walk with you down the aisle.

By far, the responsibility that your dad will be thinking about the most, and he will feel is his most important one for the day, will be walking you down the aisle. This might be the hardest responsibility for him too as he is flooded with emotions walking next to his once little girl. This part of the ceremony is typically a roller coaster of emotions for both the father of the bride and the mother of the bride as they are both happy for your future and reminisce on time passed.

A sweet little morning-of gift for the father of the bride is a monogrammed handkerchief on the big day. This meaningful gift is a small and wonderful gesture to show dad that your father-daughter relationship is stronger than ever and to help wipe any happy tears that may fall that day.

Why Does The Father of the Bride Walk The Bride Down the Aisle on The Wedding Day?

So where did the idea of a father walking his daughter down the aisle originally come from? It is actually a tradition as old as the wedding ceremony itself. The practice dates back to a time of arranged marriages when women were considered the "property" of their father, and walking her down the aisle represented giving ownership to her soon-to-be husband. The origin of the tradition is old-fashioned by today's standards of course and like many traditions has evolved over time.

"In Britain, as in many places, women had long been considered essentially the property of men, first their fathers and then their husbands," according to Time. "The phrase 'give away' suggests a lot about the woman's role in this exchange from one man to another.

In early Anglo-Saxon society, the father's control of a child, and the husband's control of a wife, was "absolute," Sir James Henry Ramsay wrote in his 19th-century book The Foundations of England. It was permitted to sell one's child and, though authority over a son ended when he became an adult, that wasn't true for a daughter.

But Ramsey explained that, in that early period, a wedding had two key components, the betrothal—the actual wedding part—and the "giving-away." The pledge of consent to marry was the formal ceremony, and it was followed by the transfer of the bride into the custody of the groom."

The father of the bride also has multiple other responsibilities on the big day. He may be participating in photographs before the wedding, greeting guests at the hotel for people coming in from out of town, saying hello to guests at the church before the ceremony, polishing up his dancing shoes for the father/daughter dance, and even giving a speech during the reception.

And let's not forget those dads who pay for a portion of or even the entire wedding. The prices of the average wedding today are one more reason to gift dad a monogrammed handkerchief. He may need something to cry into when he sees the final bill!

Gifts For The Father Of The Bride: Monogrammed Handkerchief

Everyone involved with the wedding deserves a small token of thanks - from the bridal party, ring bearers, and flower girls all the way down to the wedding planner - and the father of the bride is no exception. You'll want to get dad something that's touching, unique, but most importantly, useful.

If you want to make the father of the bride gift extra special, think about embroidering your handwriting on one of our handkerchiefs. It's a gift dad is sure to use again and again, even after the big day, and he'll think about you and your wedding every single time.

The Handkerchief Shop offers a variety of styles and font options for monogrammed handkerchiefs, and while you're buying your dad a wedding thank you present, why not buy a small token of thanks for the groom's father?

If you're interested in embroidering handwriting on a handkerchief for anyone in your wedding, contact us at info@thehandkerchiefshop.com. Please allow up to 3 business days for The Handkerchief Shop team to respond to your quote request. 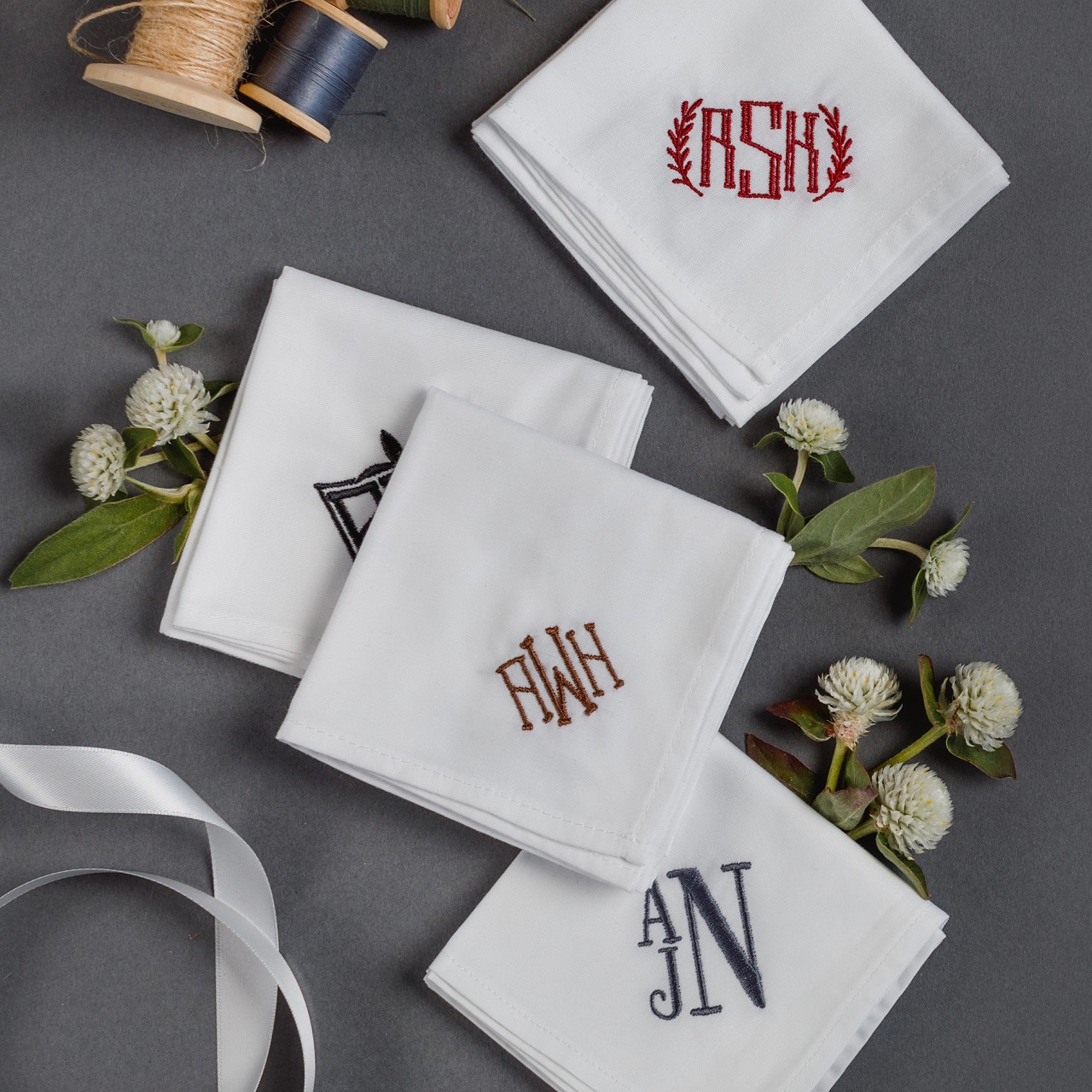 Mother of the Bride Handkerchief